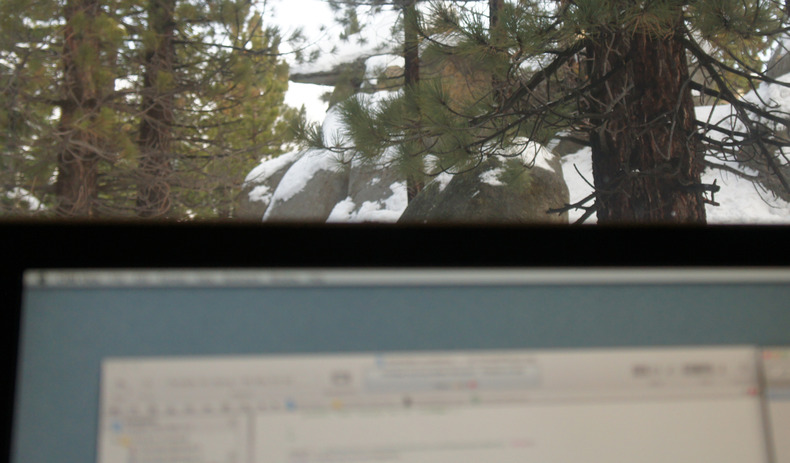 2012 was a rollercoaster. It involved getting laid off, quitting a startup, and generally feeling burned-out from several months of working hard. So in November 2012, I packed up my things in Austin and moved to Tahoe for the season.

I’m writing this to help anyone else who finds themselves in a similar situation, needs a break from city living, or just loves snow.

For a privileged many, our array of choices in life are so much greater than the narrow set we currently perceive.

Preparing - getting rid of things.

I’ll keep this short, but these are the typical reasons I’ve seen people not move:

Despite all this ruthless good-riddance, I still cheat and leave a few things with friends and relatives. And that’s okay. You’ll always have stuff that just happens to have emotional value that you just can’t get rid of. You shouldn’t have to become some puritanical 100-things-only minimalist.

Assuming you move into a furnished place, this is everything you need to throw into your car to move to a small ski-village area.

Ready? Okay, let’s figure out where to go.

This is going to boil down to a few factors:

The places I recommend in the US:

Optimizing for cost & proximity to lifts, here’s my picks:

1) South Lake Tahoe & North Lake Tahoe - This is the most bang for your buck, and where I ended up staying. Here’s why:

This said, Tahoe is risky in terms of getting actual snowfall. I lucked out during the 2012/2013 season where there was a decent amount of snowfall to keep lifts open through the season. In the 2011/2012 season things weren’t as great, and the 2013/2014 snow has been so scant that the stagecoach lift I lived next to delayed opening by over a month. Because of this, landlords will ask if you’re already employed / have money saved, because they’ve seen seasonal tenants not find local work during a bad season. One option to mitigate this risk is live near Alpine Meadows, where cloud seeding is done (Nevada did this until 2009)

2) Aspen - Another great place with a good village feel. Pricier rent ($1200-1600) but has decent nightlife and a mountain that usually has great snow. Haven’t personally been there in decades though.

3) Park City, Utah - I’ve only driven through Park City to go see Snowbird, but it felt like one of the densest communities I’ve seen built so close to the mountains. Found locals that have designed their lives to work hard and still make it to the mountains during the week. You should check this area out at least once to feel how light the snow is. My only warnings are the air quality outside of the mountains due to temperature inversions, and the mountains didn’t feel as hair-raising as places in Colorado or Wyoming.

4) Telluride / Mountain Village - Telluride’s expensive, considering the season passes are up there close to $2000 and the few seasonal rentals there start at $1200/mo and quickly go up. But either village has a gondola that takes you straight to the slopes.

5) Breckenridge - Also a decent place surrounded by a larger village, although it’s colder (known as Breckenfridge) and can get crowded.

####Not-gonna-mentions: I’m not going to mention Keystone since the closest reasonably-priced rentals are a long walk from the lifts, nor Arapahoe Basin which is a great place but requires driving, nor Vail where I couldn’t find seasonal rentals within walking distance to the lifts. Sorry, this is my personal dislike towards driving. Also, I haven’t been to Taos, New Mexico in ages, but from memory most living arrangements there require driving.

This is probably one of the more stressful parts. My personal experience involved surfing craigslist the 6 weeks before the move, calling and emailing people left and right. Then I just drove out to Tahoe just after thanksgiving,stayed in cheap motels for a week, and emailed more craigslist posts telling them I can give pay them and move in immediately.

If I had to do it again, I’d skip craigslist and call real estate agents months in advance, seeing what will soon be available from the pool of retirees using their condos as summer homes. Furthermore, I recommend finding a neighborhood with condos since they take care of all the snow-blowing equipment,etc. Finally, realize that some places may look down the street from the city center, but are actually up a mountain pass! Remember to check the terrain map if you’re trying to avoid driving down a mountain pass just to check your mail (mail delivery does not occur in Tahoe Village, you get a post office box).

Finding people and escaping back to concrete jungles

Running away to some new remote village is a bit weird at first, but unless you’re going to some obscure place, you’re not the only geek into living on mountains. There’s enough people to warrant starting a meetup group like the coworking group in Tahoe. You’ll also just find yourself inevitably talking to folks on the lift, on the weekdays especially there’s a healthy mix of folks from business owners, doctors, students, or just general ski bums up for chatting.

Finally, places like Park City, Tahoe, Whistler, and Breckenridge are only 2-3 hours away from a major city. Park City’s famous for being able to get you from flying into Salt Lake City to getting on the slopes within an hour, and South Lake Tahoe is less than an hour from Reno which is large enough to get errands done.

After living in a resort town then moving to a major city, I’ll admit I miss it to an extent. There’s something nice about only hearing mountain winds at night instead of cars, seeing homes free of the suburban-pressured concept of a well-kept yet water-wasting lawn.

Overall, I hope this guide helps you if you have the itch, and have the position to go out there, even if it’s just for a month.

Special thanks to the friends (you know who you are) I met while living out there, and those that came to visit.

##Even more footnotes Just some cool people I discovered living in the mountains: